The Ballad of Alfonso Lopez 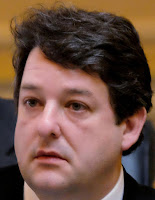 This weekend was a bellwether one for the Washington Capitals. They absolutely crushed the Tampa Bay Lightning twice on their own ice, 6-2 and 4-2. And I want to talk about something kind of similar today.

Not hockey, but someone who just can’t stop getting shelled right on their home turf, Delegate Alfonso Lopez (pictured right).

Over the weekend, Delegate Lopez was no doubt thinking that he had earned a reprieve from the constant barrage of legislative life. He attended what must have seemed like a softball event; an Arlington town hall hosted by the far-left group Indivisible at the Arlington Central Library.

“Surely,” he must have thought, “in a room like that, only slightly to the right of Vladimir Lenin, I can answer a couple of easy questions, bash the Republican majority, excuse my lousy legislative efficiency, and get home in time for dinner.”

Midway through, a group of illegal immigration activists, calling themselves La ColectiVa burst in to the meeting to continue their campaign against Lopez by shouting down those asking and answering questions. Their main goal is to shame Lopez for work he did for the Immigration Centers of America, particularly a facility in Farmville, in his day job as a lawyer.

As you can see on the video, they then proceed to spread the peanut butter of their wrath all over the wonderbread that was the table of legislators before them. Enter the friendliest policeman I have ever encountered. He politely makes his presence known, offers to leave, and points out where he will be if anyone needs him to a chorus of admonitions by the illegal immigration activists, who, in a fit of irony, are yelling at him asking why he was called.

The entire scene is really a caricature, and shows in sharp detail the cannibalistic nature of the far-left progressive movement. It’s a race to the Left, then a race to the bottom.

vagopcaucus.blogspot.com
Posted by VA GOP Caucus at 7:16 AM No comments:

The unlikeliest breath of fresh air has washed across the political landscape in the last couple of days. Hillary Clinton, the Napoleon-in-Russia of Democrat politics, has slipped up and let a little truthout.
She admitted that being a capitalist ‘probably’ hurt her campaign with Democrat voters.

THANK YOU MRS. CLINTON! For putting words to what we have all seen borne out over the last couple of years. Luckily for us, the ever left-tacking Dem base has not conned the voters into giving Socialism™ a chance to do to America what it has done to such lovely countries as Venezuela, or Cuba.

There’s a lot of things wrong with Hillary Clinton; that much we know. But at least she can admit the truth; that today’s Democrat party is growing more radical by the hour.

Posted by VA GOP Caucus at 8:10 AM No comments:

In a rare turn, we must applaud LG Northam for his realism (a virtue not shared in the laughing-gas-infused echo chamber of DPVA) when he acknowledged and complimented Speaker-designee Kirk Cox at last night’s dinner for VirginiaForever, and looked forward to working with the certain Republican majority in 2018. This exposure to reality, accidental or not, for Virginia Democrats must be painful.

Unfortunately, the polls are sinking for LG Northam, and while he may not get to make good on his olive-branch, we appreciate it all the same.

His good nature, however, does not seem to extend down the ticket. Justin Fairfax has been cut from Dem literature targeted to NORTHERN VIRGINIA. So, just to be clear, the only non-white-dude on the ticket, in the most diverse region of the state, from which flow the majority of democrat votes, has been canned. It’d be sad if it wasn’t such good farce.

The reins holding the bit in the mouth of the ticket are being held by an international, DC-based union group, LiUNA. Apparently they are not fans of Fairfax’s opposition to the ACP, putting a union *gasp* on the clear opposite side of the Dems’ base. This will be a great topic for conversation when Sullivan, Levine, Simon, and company return to Richmond to crow about Republicans bowing to their donors, and the “party of old white men.”

vagopcaucus.blogspot.com
Posted by VA GOP Caucus at 9:03 AM No comments:

VT and Radford Students, Do You Know Tom Steyer? Cuz He Knows You

In today's Roanoke Times, Carmen Forman details how NextGen, a California-based liberal PAC (admittedly, legally) extorted the identities of thousands so that they can continue their annual season of spamming your cellphone.

You may remember PAC Chairman Tom Steyer from his previous and extensive meddlings in VA politics, as is his tradition in election years that could benefit him.

Even knowing who that is, it's hard to reconcile that a blatantly, and vitriolically, political special interest group can simply send a letter and receive tens of thousands of involuntarily volunteered cell phone numbers, then funnel it to political campaigns being run by twenty-somethings who will, in all likelihood, be in a different state campaigning next year.

At the very best, this is an overt intrusion on Virginians' privacy, but at its worst, it could open them up to identity theft. It can happen to anyone, but it's becoming more and more in vogue to hack political organizations these days.

vagopcaucus.blogspot.com
Posted by VA GOP Caucus at 10:08 AM No comments: