Who's Bad For Business???

After some careful research and analysis I have found the Top 6 "Bad For Business" (AKA DUMBEST!) bills of 2008. I thought Virginia's thriving business community would be very interested to see just how anti-business our friends on the other side of the aisle are...

Thank goodness we have some down to earth legislators in the Republican House Caucus to kill these bills and keep Virginia's businesses among the top in the nation...

Saslaw Turns His Back On NOVA And Hampton Roads!

Just as I suspected ... Senator Saslaw is once again putting partisan politics as his top priority, while turning his back Virginians and more particularly, Northern Virginia and Hampton Roads.

The basic differences (which are also pointed out in the press release below) are that the Senate is ....

As Delegate Dave Albo so eloquently stated below ... "Bringing up new statewide revenues and tax increases that have been repeatedly rejected isn’t negotiating, it’s posturing."

I could not agree more.

UPDATE: Word in the GAB is that a transportation compromise could be reached within 24hrs if the Senator in purple shown above will quit playing games and start doing the good peoples work ...
------------------------------------------------
House Transportation NegotiatorsFocus on Regional Fix to Comply with Court Decision
RICHMOND, VA – In a letter to Senators Richard L. Saslaw (D-Fairfax), Yvonne B. Miller (D-Norfolk), and W. Roscoe Reynolds (D-Martinsville), negotiators for the House of Delegates rejected the proposal of the Democrat Senators to increase taxes statewide on gasoline and on vehicle sales. Delegates H. Morgan Griffith (R-Salem), M. Kirkland “Kirk” Cox (R-Colonial Heights), and Samuel A. Nixon, Jr. (R-Chesterfield) have been working diligently to bring the Northern Virginia and Hampton Roads regional funding components of the Comprehensive Transportation Funding and Reform Act of 2007 (HB 3202) into compliance with the decision of the Virginia Supreme Court in Marshall v. NVTA .
Wanting to resolve the impasse as quickly as possible, House negotiators are insisting that negotiations be focused on correcting those provisions of HB 3202 that were struck down by the Court’s decision. Their letter notes, “An immediate remedy to this specific problem is readily available to us. Injecting issues unrelated to the ‘regional fix’ necessitated by the Court’s decision will deny the benefits of those previously approved regional solutions to commuters, families and businesses in our Commonwealth’s fastest-growing regions.”
House negotiators place the responsibility for any delay in approving a speedy remedy squarely with their Senate counterparts, taking them to task for seeking to expand the scope of the legislative discussions. “Unfortunately, you raise issues that go well beyond remedying the effects of the Virginia Supreme Court’s decision in Marshall v. NVTA ,” the letter, signed by all three delegates, observed. “By doing so, you are needlessly delaying and jeopardizing implementation of the regional transportation funding program that we approved on a bipartisan basis just last year.”
“There’s absolutely no reason to delay resolving this situation,” declared Delegate David B. Albo (R-Fairfax). “Bringing up new statewide revenues and tax increases that have been repeatedly rejected isn’t negotiating, it’s posturing. Every day they fail to agree to a fix, Northern Virginia loses $1,000,000 in revenues for roads and public transit. By revisiting already rejected proposals, the Senators are keeping my constituents – and millions living, working and commuting in Northern Virginia – needlessly stuck in traffic.”
“Although I can appreciate the desire of the Senators to get as much as they can in these negotiations, and I know these three Democrat Senators have frequently expressed support for higher taxes, the Court’s decision did not say ‘raise the gas tax and the car sales tax’,” noted House Majority Leader H. Morgan Griffith. “It said we needed to change the method of enactment for the regional components of HB 3202 to ensure a body of elected officials imposed the taxes. That – and that alone – should be the focus of our negotiations.”
# # #
Posted by VA GOP Caucus at 10:51 AM 2 comments:

Earlier today Delegate Phil Hamilton issued an excellent press release stating the differences between the House Budget and the Senate Budget. I thought everyone would be interested to see the lack of desire that Senate Leadership has to work out a swift budget resolution.

The primary priorities of House negotiators are 1) to increase the number of service waivers for the mentally retarded by an additional 650 waivers above the 150 waivers recommended by Governor Kaine, and 2) to provide a first year pay raise for teachers paid from a rebenchmarking methodology change and a first year pay raise for state employees and college faculty paid for from the overpayments to the state's employee health insurance fund.

Prior to the first meeting Senate negotiators set the tone when Senate majority leader, Richard Saslaw declared he was prepared "to stay until December" and Senator Janet Howell stated that she "would never agree" to the methodology change being proposed by the House budget.

Although no such statements or "lines in the sand" have been offered by House negotiators, they have made it very clear that first year pay raises for teachers, state employees, etc... and additional assistance for the mentally retarded were higher priorities than expanded programs for four-year olds, criminals, and citizens with drug problems.

Hopeful that a budget resolution will be reached by Saturday, Delegate Phillip Hamilton (R-Newport News) said, "The state budget defines the General Assembly's priorities. While there are many issues that must be addressed, the expressed priorities and attitudes of delay and intransigence of some Senate negotiators cause me to question the seriousness by which they are working to resolve honest, philosophical differences on funding the core service functions of state government."
Posted by VA GOP Caucus at 10:57 AM 1 comment: 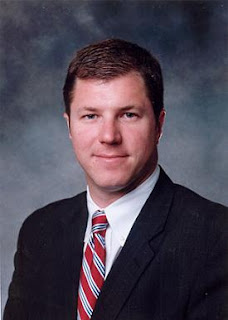 In Sunday's Richmond Times-Dispatch, Delegate Peace had a sensational column citing the House Budget and its funding for K-12 Education. He identifies numerous differences between the House Budget and the Education Funding shortages that seem to be the theme of the Senate and Governor's budgets.

1. The House budget gives teachers a raise in the first year (2008), unlike the Senate or Governors budget.

2. The House budget protects and invests more money in school construction and puts a greater amount of funding into classrooms and K-12 education than the Senate or Governor's budget.

4. The House budget increases school construction grants by $70 million, while the Governor's budget cuts the same grants by $220 million.

Even with MORE OVERALL FUNDING than both the Senate and Governor's budget proposals, the Democrats are still claiming that House Republicans are cutting education funding!!

Sounds to me like Delegate Peace needs to give the Democratic Caucus some basic arithmetic lessons...
Posted by VA GOP Caucus at 10:43 AM No comments:

Last Friday on the House Floor was yet another example of why Virginians across the state are very fortunate to have a Republican Majority in the House of Delegates.


SB 161 came over from the Democratic controlled Senate chamber and was the second attempt this session to allow businesses in the Commonwealth to unionize. Virginia is currently one of 22 states in the nation that is conisdered to be a "Right-to-Work" state and has been since 1947. Thankfully Delegate Jimmy Massie spoke against this bill and brought all of it's many flaws to light ...

Senator Donald McEachin is the Senate patron of this bill. He is serving his first term as Senator from Richmond, and it is my hope that he will find something more productive to do with his time than to pursue legislation that would eliminate a statute that has made Virginia such a prosperous state.
Posted by VA GOP Caucus at 4:20 AM 7 comments: